While building our Smart Home / Smart Energy platform for Presciense, we wanted to differentiate ourselves from the majority of products on the market that suffered from high latencies. Even while connected to the same network as many IoT gateways at the time, a simple operation like turning a light on and off could take multiple seconds to both perform and display on the application. The biggest contributor to these latencies (and also availability problems at scale) was the use of centralised, rather than peer to peer communications between the mobile handset and gateway. Along with this, most competitors used synchronous http or polling tricks to act on a device and receive data on its state. We came up with design utilising multiple factors to achieve low latency and reduce overall operational costs at high scales.

Achieving these features and NFRs set over 2 mobile platforms (along with our linux based command line tools for testing) is a challenge for a small team, as to do so we needed:

A component this intricate would be difficult to both develop, test and maintain over the 3 required platforms. Having this client functionality as a cross platform component that could also be tested on a non mobile platform independently of a user interface seemed to have a number of advantages, as did developing a client in the same language and ecosystem as our firmware - Rust.

Rust's pros and cons as a general purpose or systems programming language are discussed at great length in other places, but any language that has a bidirectional, transparent C ABI is highly amenable to integration into other language ecosystems. In the end, almost everything in modern software will be able to call into a Rust library. 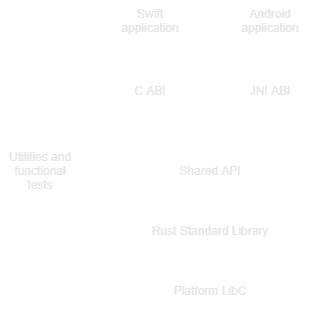 Rust, as a system programming language has supported native targets for a bewildering number of chip sets and platforms. Usefully, this includes iOS and 64 bit android - 32 bit android can be a little more difficult due to some interesting design choices in its LibC design but it only a common target in embedded systems rather than handsets or tablets nowadays.

For Android, you will require a .so, which needs no additional tooling. For iOS, you will need a universal static library generated by the cargo-lipo tool.

Rust has a built in way of declaring functions to be accessible via a C ABI, but it is convenient to use additional tooling to generate and maintain a header file automatically for use by swift and other potential consumers. The sn-bingen crate is at the time of writing the most well maintained tool for this.

As Android uses Java, you cannot directly call standard C ABI functions and must implement a JNI interface. The painful way to do this was via traditional tooling like SWIG, on top of the C interface. There is however now mature support for exporting a JNI interface directly from a Rust library using the reliably named JNI crate.

The two binding interfaces, C and JNI can be conditionally compiled depending on target architecture and share dispatch to a Rust API shared between them. Both binding interfaces require unsafe code due to raw pointer use, but this can be contained within the interface functions. Once you reach this point in the abstraction, you have the full power of standard rust and its ecosystem.