As with all problems with computer science, a potential solution comes in the form of a layer of abstraction. Backend codebases introduce abstraction in various ways to allow for a region of functionality to be logically separated. Abstraction layers take many forms: classes, interfaces, modules, libraries, microservices and subsystems each offering benefits and compromises. Units of re-use become used for subdivision of labour and comprehension within an organisation.

Most options for abstraction and organisation are available in frontend code, it’s code so why wouldn’t they be. However, recently some of the more architectural patterns such as microservices have begun to be explored.

In an attempt to simplify and separate codebases in a similar way to microservices, micro frontends split the UI into separate sections that can be delivered and updated independently. However, the benefits are tempered by the need for increased integration testing. 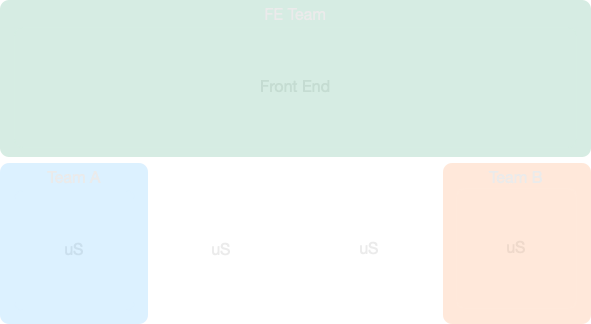 A traditional frontend would look like the diagram above, with the frontend implementation cutting across multiple microservices. This architecture tends to result in either there being a frontend team which can create a bottleneck or multiple teams each making alterations in a single frontend codebase, possible but logistically complex. Another side effect of this arrangement is that the frontend tends to become an orchestration point for the whole system, gradually absorbing functionality from the microservices, causing them to become anaemic database as a service. Everything comes full circle, and we now have a monolith in the frontend. 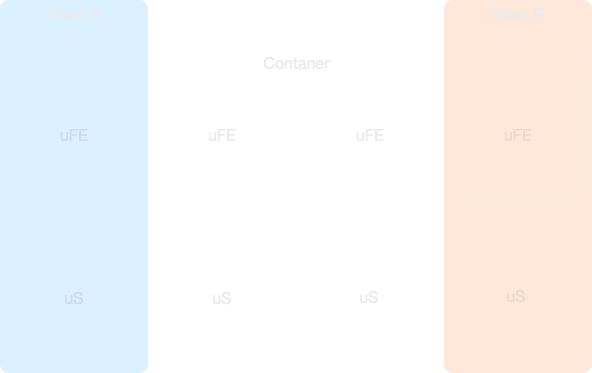 The separate user interface components need to be composed to create the whole user interface. There are multiple methods for composition typically using some form of container with on the server or in the client. Care must be taken to constrain interaction between components to reduce coupling, clearly defined interfaces, and events ease adoption.

Each of the teams has a full build pipeline for their component with a final integration step to create the complete application.

Large organisations may need to scale beyond the scope of single applications, and frequently need to create a seamless user experience across multiple subdomains.

Micro frontends will continue to work effectively within a subdomain, but across the whole domain, the integration overhead will quickly become unmanageable.

To work across multiple subdomains, other patterns must be used. Two key elements are required to deliver a consistent user experience across all of the subdomains:

If the two elements above are in place, it becomes relatively simple to integrate into the display with links between the subdomains being created in the same way they would be if the links were to an external site.

Background integration with APIs can be used to share information between subdomains, restful APIs that contain links to content help decouple the subdomains limiting the amount of data that needs to be shared for them to interoperate.

Events streams are also useful mechanisms to share data between subdomains, by definition events happened in the past and are immutable so they can be copied across the organisation domain freely. However, care needs to be taken interpreting events emitted by other subdomains.

If input is required from a user, they should be directed via a link to the subdomain that owns the data and process, avoiding issues with eventual consistency and also implementation of business process in multiple domains. Some components such as navigation may need to be shared across the entire domain with elements of configuration for local scope.

Integration via links also has the advantage that alternate technologies can be used across the domain, not requiring a single framework to be adopted.

An excellent example of an integrated user interface at this scale is Office 365, identity, design, and some navigation elements are shared across all of the products in Office 365. Still, they exist on multiple domains, e.g. office.com, sharepoint.com etc. Background integration via graph API’s allows the user interfaces to pull resources from other products, e.g. office.com pulls recent documents from SharePoint to be able to have personalised links on the Office homepage.

Caution should be used implementing unified user interfaces, use of a single framework can cause issues over time. To be able to unify multiple domains, it can often be simpler to rely on more straightforward techniques such as a single identity and design system, tightly scoping individual technology choices to a particular subdomain.

At San Digital, we believe the work we do today should positively impact the environment and not compromise the ability of future generations. It seems obvious, but large organisations continue to think sustainability is a box-ticking exercise and an inconvenience.

There are more than enough articles about agile software development; this post is about agility elsewhere.

The San Digital team has worked with numerous organisations in both the public and private sectors to transform their applications architecture into a flexible and business-focused model. Working with events at scale is key to maintaining individual teams' agility.

The process of building a mobile app

The team at San Digital has extensive experience developing apps for mobile devices, smartwatches, and smart TVs; using native and hybrid technologies (and everything in-between!) including using Rust for complex comms.

While setting up a sample project from an unnamed large vendor the other week I was disappointed by having to read large amounts of documentation and run various bits of script to install dependencies and set up infrastructure. We live in a world that has tools old (Make) and new (Docker) that can be combined to make onboarding engineers low or zero friction.

Continuing our series of posts on web protocols, we have been investigating more specialist protocols, in this case, "FHIR". We have produced a document based on our research, investigations and experience.